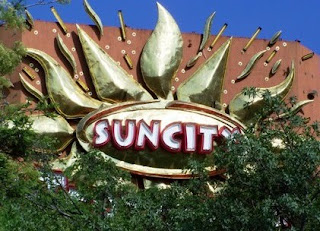 Oh what a weekend!! Sun City - Palace Of The Lost City
But you know what they say... what happens in Sun City...STAYS in Sun City.. sooo..here are a few pics that I CAN actually post..some need to STAY in Sun City..lol...
We stayed at the main Sun City hotel and had a blast of note!

This was the view from out hotel room.. I was sharing with a good friend of mine and colleague Palesa.. she's so full of energy! I could never keep up.. ever!!
How stunning is this view though? Super! 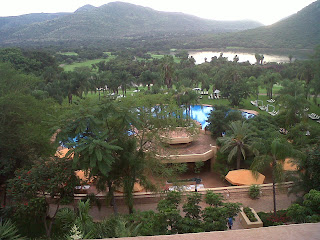 So before we left.. Palesa and I went shopping for swimsuits. We first went to Jay Jay's and being the African girl that I am, I obviously have a smaller top and curvier bottom.. so I would obviously need a smaller bikini top and a bigger bikini bottom.. but Jay Jay's wouldn't budge! They refused to sell me different sized items.. I thought it was bizarre and so inconsiderate..? How in the world was I going to wear a bikini bottom that was 2 sizes smaller??? I was actually quite disappointed and depro about that situation because they're actually one of my favourite stores and they have such cute bikini's... So I went to Edgars and found myself this full swimsuit...I love it! this is me trying it on and I'm nto showing you the full length becuase I wasn't even brave enough to wear it on its own....yah. I'll delve into that some other time... 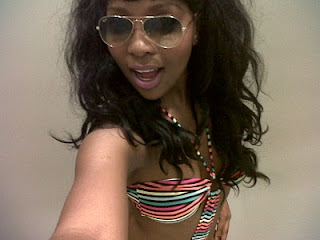 Here's Palesa, Lee-Roy and I hanging out at the Valley of Waves.
Well you can't really see the waves, but they were there ok! 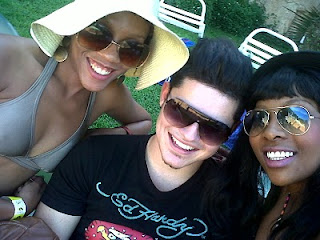 Lee-Roy and I getting a tan... although I think he needs it more than I do, but what are friends for? I was there for moral support... 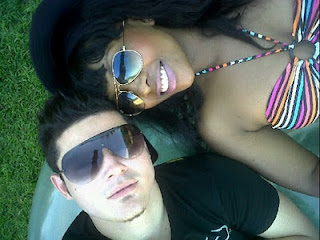 Here, he was going for the macho hairy-chested man look with my poor weave that falls out as the prop...lol..and moral support once again. I mean a macho guy has gotta have a hot babe around him right? He's such a great friend. 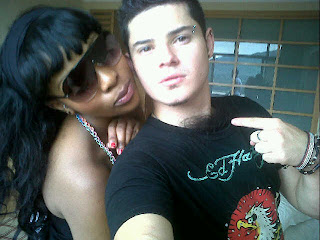 It was a great weekend filled with clean fun... and a bit of 'work'... It's great having friends to have fun with and who are also there in times of need.I have no doubt that these two have my back...always... Love you guys!
Posted by Pearl Modiadie at 7:49 PM